Posted on January 22, 2011 by journalismprof 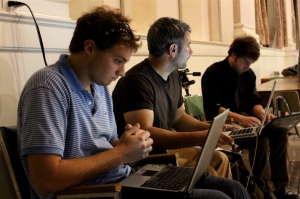 The response to David Cohn’s (aka DigiDave) revival of the Carnival of Journalism, has been pretty impressive.  My first post focused on a new news literacy with Journalism students and the need to focus on accuracy in the aftermath of the shoddy reporting in the opening hours of the Tucson shootings.

One of the big discussion items so far in the “Carnival” center on the need for universities and programs to be innovative when it comes to the teaching of Journalism — another great topic.

I’m now entering the second semester of a formal partnership between my Investigative Journalism & The Web class and MassLive, the Web site of the Springfield Republican. The class was constructed as an attempt to take an in-depth look at the town of South Hadley and its residents in the aftermath of the tragic suicide of South Hadley teenager Phoebe Prince one year ago.

Students were required to blog throughout the course of last semester — and as more and more incidents made their way into the news, it became clear that bullying was an issue that went way beyond our corner of Western Massachusetts.  Students also produced a final package of stories — a combination of text, video and audio.

The class is both an attempt to be innovative by creating a newsroom-like environment and to get students out into the community — attending meetings and events and talking to residents about the bullying issue.

It was not easy.

That is probably the biggest message I would send out to educators looking to begin similar partnerships. As many of us often find out, a great idea often involves a lot of time.  Establishing and maintaining such a partnership is a time-intensive undertaking.  Don’t get me wrong, I’ve enjoyed it and see it as an important element in a students’ education but I often find myself editing blog posts at 6 a.m. in order to get them onto the site in a timely manner.  And, you find yourself fielding queries from students, editors and sources at all days and hours.  Kind of, ya know, like a newsroom.

*  The need to contact sources before you set up the class is almost mandatory.  Let as many sources as possible know what you’re doing before the class starts.  In the end, it helps students when they start making calls.

*  No matter how much you prepare students, there is a possibility students will find themselves in a confrontation (especially if it’s an investigative class.)   Classes on interviews, dealing with sensitive topics and handling confrontations should be an early discussion as well as one you return to frequently.  Also, give students your cell phone number in case they find themselves in a difficult situation.

* Set up an editing system with your newsroom partner that allows for multiple set of eyes before publishing.  In our case we had at least one set of eyes reading blog entries and the final projects had multiple editors, including myself.

* Identification.  Perhaps the biggest confusion comes when students try to identify themselves with sources.  It’s best to leave “class project” out of identifiers because sources often think that “class project” means “not published.”  Students also have to work hard to be taken seriously by sources.  Youth ends up being a negative in the eyes of many sources.

What was exciting about the class was the way that students worked with each other, helped each other and ended up producing a fairly cohesive project by the end of the semester.  It became a partnership of sorts and I found myself switching roles between editor and instructor — a mix that many traditional professors aren’t necessarily comfortable with.  Professor as “all-knowing seer” needs to be abandoned in such a class.  You find yourself working together with students, rather than standing at a podium and dictating what journalism is or should be.

The nature of the project required a certain amount of failure — some stories and blog entries were not going to pan out — so in the end you end you have to find a way to come up with a grade that reflects both the work and the effort.

Most importantly, I believe the project has kept the discussion going about bullying, teen suicide, the Phoebe Prince case and other issues.    Coverage has helped that conversation continue and in an age of decreasing resources with newspapers, that’s the biggest value Journalism programs can bring to communities.

Steve joined the journalism faculty at the University of Massachusetts at Amherst in August 2007 and has been working to incorporate multimedia across the curriculum. Since arriving at UMass, Steve has developed three courses modeled after his multimedia journalism course. The courses allow students to work in teams in a newsroom-like environment where they work on packages -- using video, audio and photos to tell stories. He is also working with students on developing amherstwire.com, a news Web site staffed completely by students. Steve has more than 25 years of experience as an editor and reporter for print and online publications, including 10 as an editor at washingtonpost.com. He also edits part-time for espn.com with the NFL and college football network.
View all posts by journalismprof →
This entry was posted in Blogging, Future of Journalism, Partnerships, Phoebe Prince project, Steve Fox and tagged Blogs, Future of Journalism, innovation, Partnerships, Steve Fox. Bookmark the permalink.